Data Scientist has been dubbed The Sexiest Job of the 21st Century by Harvard Business Review in 2012. The field of Data Science has grown a lot since then and much has changed. But has this oh-so-modern job avoided the gender pay inequalities that plague so many traditional jobs?

The data science platform Kaggle recently polled its global user base in the 2018 Machine Learning and Data Science Survey. Almost 24,000 replies give us insight into this question.

Who are the survey respondents?

The survey replies were primarily from the US and from India with China as a distant third:

Almost all users provided their gender as either male or female. 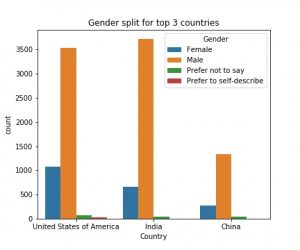 Digging further into the age split by country for male and female respondents shows: 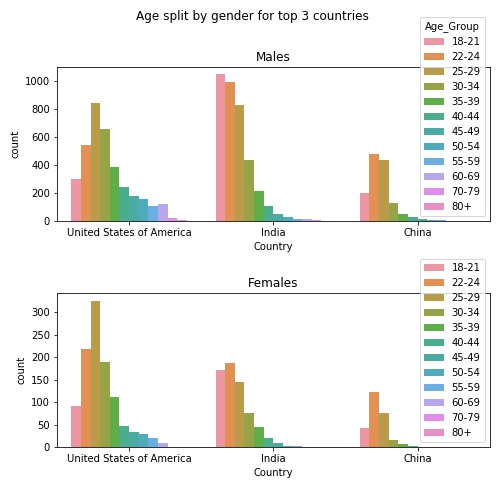 What are the income levels by country and gender?

Survey participants reported their income by indicating a range in USD.

Splitting the data by gender in each country shows that:

The distribution of salaries by country and gender appears to show that men earn more than women. This gender pay gap is consistent with research found elsewhere.

Do female data scientists get paid less than men?

So far we have looked at all replies to the survey. Survey respondents reported a wide range of job titles, educational attainment, years of job experience, and tools used. We need to dissect the data more carefully so that we don’t compare a male CEO in his 50s from India with a female Indian math student and then conclude that he makes more than her (which he probably does).

The Kaggle survey had a question that will help us zero in on the data scientists. Kaggle asked each participant “Do you consider yourself to be a data scientist?”. 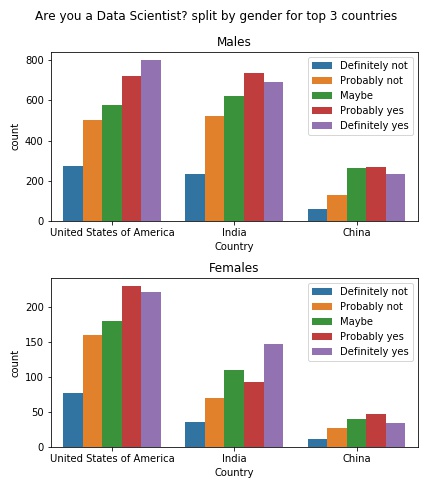 There is a dip in the “probably yes” group for Indian women but other than that we get several hundred individuals that rate themselves on the “yes” side for the US and India. The number of Chinese women in each group is considerably smaller so we will focus on the US and India going forward.

Now we have all the ingredients to try to answer the question if there is a pay gap between men and women — we will look at individuals that ranked themselves as data scientists and compare their pay, age, gender, and country. That’s a lot of dimensions to pack into one visualization:

Please note that the smooth lines give the impression of extremely detailed and rich data but we are getting into some pretty sparse areas of the dataset already (eg there were only three Indian women in the age group 45–50 that considered themselves “definitely” data scientists). Nevertheless, the overall shape of the contour plots should give us some insight into the data:

It is very hard to estimate how confident respondents were when they categorized themselves as “probably” or “definitely” data scientists. There might also be differences between genders and culturally between countries. For this analysis we will focus on those who had the confidence to consider themselves “definitely” data scientists — so let’s try to understand what we might infer from the charts in the bottom row:

The female data scientists that responded to the Kaggle survey that are in their late 20s from the US appear to earn a bit more than their male counterparts (the blue peak is above the left orange peak). But for older males the pay seems to be higher than for females (the 30–35 age group has a much higher salary range expanding more into the 150k+ USD area).

The pay gap between male and female self-categorized data scientists from India appears to be minimal (the overall shape of the distributions is fairly similar). Most male Indian data scientist seem to be a few years younger than females in the same pay range (the peak for men and women is 2–3 years apart).

We looked into a rich dataset with almost 24,000 survey responses. Once we split the data by country, self-categorization as being a data scientist, and gender, we were able to compare self-reported pay data by age for men and women.

The analysis of the data suggests that older male data scientists in the US that replied to Kaggle’s survey earn more and have a higher earnings range than their female counterparts. The spread between pay for men and women data scientists in India seems to be less pronounced.

Where can we go from here? What is this telling us about larger socio-economic trends and differences between the US and India? Is the pay gap more pronounced in mature economies or industries?

The analysis and graphics for this post were made with Python. You can find the complete project on Github here: https://github.com/Lindstaedt/Kaggle-2018-Survey-Analysis.

The original dataset from Kaggle is here: https://www.kaggle.com/kaggle/kaggle-survey-2018/